A strategic card game in the League of Legends universe 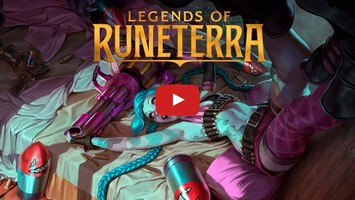 Advertisement
Legends of Runeterra is a collectible card game that's similar to Hearthstone... but set in Runeterra, the popular League of Legends universe. Like most CCGs, your mission is to battle your opponent until they have no life points left.

Although Legends of Runeterra has a gameplay that's similar to other CCGs, a few key features are different. Each turn, you'll receive a manna point that you can use to play cards, which can contain either a creature or a spell. As you might expect, the spells take effect imminently, while the creatures have to be deployed on the battlefield.

But as the turns are played, the gameplay of Legends of Runeterra starts to differ from that of Hearthstone. During each turn, one player attacks and the other defends. Typically the attacker plays creatures and the defender tries to block them, but like Magic: the Gathering, both players can cast spells at this time.

Another unique feature of Legends of Runeterra is that, as well as the normal creature and spell cards, there are also twenty different hero cards. Each hero is inspired by an LoL character and has unique powers. Learning to use each one wisely will greatly improve your chances of winning.

Legends of Runeterra is an excellent CCG that offers an intriguing alternative to the aforementioned games Hearthstone and Magic: The Gathering. It's yet another outstanding title from Riot Games.
Translated by Jasmine
Advertisement

new update out now on qooapp but not here, please update

Similar to Legends of Runeterra

Tongits Go
Play fast and fun games of Tongits
Teen Patti - Indian Poker
Face your opponents in this Indian poker game
Zynga Poker
The most popular poker game now in your pocket
UNO!™
Classic UNO™ fun for your Android!
Pokemon Trading Card Game Online
Play, exchange and challenge other players from around the world
Legendary Royale
One of the best Clash Royale private servers
Tongits ZingPlay
Play a game of Tongits against players from all over the world
Magic: The Gathering Arena
The full 'Magic: The Gathering' experience, now on Android
Advertisement